Inspired by the 18th century costumes and lifestyle, Ivy Paige's latest production, Scandalous! House of 'Whorecraft' appears in the West End, London, since October (check the different dates). Ivy's fascination with stories of the time and brothel Madams, their spirit, entrepreneurial character and their drive for success, despite their prophesied pitiful destiny, has been the inspiration for this dramatisation.

Set in London in the mid 18th century, the story transports you into a voyage with Ivy Paige who is to become London's most notorious brothel Madam. Accompanied by her courtesans, Ivy will enthrall you right from the beginning...!

A very talented performer, with a business spirit of her own, Ivy Paige promises to take you on a journey filled with intrigue, thrill and fabulous acting; undoubtedly, I expect the best of theatre play, and performance. She has collaborated with two grand names in music and theatre productions, Harper Ray (artistic director for the West End Cabaret Club 'Too Too Much' - formerly the Raymond Revue Bar, and presently producer/director at the Shakespeare Globe theatre), and Peter Saunders (formerly a member of Dexys Midnight Runners) who brings his signature tunes (a mixture of old and new songs), making a most exciting combination, not just in terms of music and cabaret but in ideas and creativity.

Scandalous! is a play not to miss this season, as it vows to bring burlesque, cabaret, music and a fabulous story line with talented actors, all in one night...!

Visit Ivy Paige at: www.ivypaige.co.uk
for information on the show and dates - Leicester Square Theatre, London 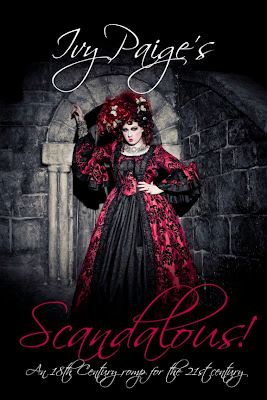 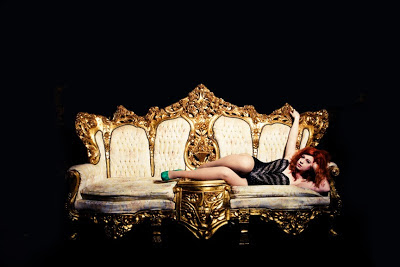 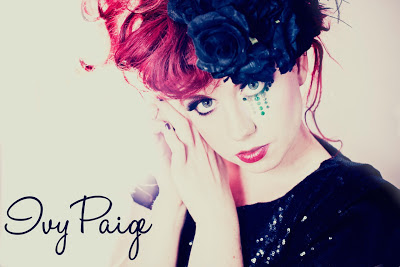 
La Bellevilloise hosted the 4th Paris Burlesque Festival in October 2012. Situated in the 20th arrondissement, la Bellevilloise, with its amazing history, prides itself in being a popular cultural and events venue, with a welcoming restaurant, main hall, loft and a cellar, all able to accommodate various events.

Spread over four days, the Festival's theme was 'La Fiesta de la Muerte', inspired by the Mexican celebration of the Day of the Dead, which reveres the death of our loved ones with various offerings and rituals.
The festival was an ensemble of burlesque shows, a replica of a Mexican village with its souvenir shop, tattoo parlour, spirit exorcist and a peep show, which gave a taster of burlesque tease and strip.
Not having attended this festival previously, I was eager to explore the whole venue.

Organised by Sebastien le Bison and Juliette Dragon, the Paris Burlesque Festival indulged us with more than burlesque shows. Making the most of the venue, each floor offered a different type of entertainment. The village and main shows shared the Fiesta de la Muerte theme, while the cellar, with its jazz band entertaining the crowd who danced their way through the night until 6 in the morning, had much less connection with the rest of the festival.

The atmosphere in the village was vivacious once the first show finished, and the guests found their way to the loft. An exuberant crowd enjoyed all the entertainment provided, from the 'lucha libre' bar, to the spiritual exorcist working her magic on the lost souls and the mariachi band captivating the public, bringing an authentic flavour to the night.
A wrestling ring became the centre of attention with grand performance from an all female cast, entangling themselves in a fight, to the pleasing eyes of the public.

On the terrace, which provided shelter from the light rain, we spoke to a few young enthusiasts of neo-burlesque who confessed that although they couldn't afford the main show, they were very happy to be part of the village and the jazz band soiree.
According to them, Paris still doesn't offer a plethora of burlesque entertainment like you find in London, and they wished they could get a wider range of shows throughout the year.

The festival seemed to have attracted an extensive Parisian crowd, the vast majority in casual wear; a few made the effort to dress up more 'burlesque'. For those unprepared, who wanted to blend in and be part of the 'Fiesta de la Muerte' affair, a team of make up artists was at hand at the entrance of the village to transform any participant into a 'Fiesta de la Muerte' worthy member, with wonderfully creative face painting.

After what seemed like a long wait, the main hall doors opened to a fervent crowd, all impatient to be captured by these performances. The forum lacked some atmosphere, with a basic arrangement of chairs in rows. A more cabaret or theatre ambiance would have immersed the spectators into the burlesque mood further.

The hosts, Sebastien and Juliette, welcomed the spectators introducing this year's theme. Dressed for the occasion, Juliette continued on her own as the compère for the night, ensuring the audience understood the etiquette for the show.

Bringing us an all international cast, the Paris Festival raised its curtains with a poetic number by a French couple, 'Les Amants d'Outre Tombe' (Lovers beyond the grave), setting the scene for the night, the tragedies of love and death, with its inevitable sad denouement...!

The only boylesque performance tonight came from Charly Voodoo, from France, acting the tragic destiny of a bullfighter caught by death; a drama performed to the eternal Spanish composition of 'Aranjuez' by Joaquin Rodrigo, one of my all time favourite guitar pieces. Fighting his way through the encounter with great stage presence, Charly Voodoo had the audience enthralled, as all cheered enthusiastically. A fatal end for the bullfighter who finished in a grand dramatic finale, blood everywhere, stripping to his death...!

After this rather bloody scene, a fantastic, creative performance from Calamity Gin, all the way from the UK, with her wonderful audience interaction, delivered a story of death, frolicking with a skull, with abundant wit and humour. A well deserved ovation from the spectators who relinquished in her finale, teasing and stripping to reveal spider nipple tassels - just for the occasion!

From Sweden, crept in Ivoncita, all in black, a happy widow who revels in teasing a skull too, maybe a past lover. Paroding the joyful and satiric side of death, she showers herself in her lover's ashes...! A vengeful act performed with satire...!

Another favourite artiste amongst the audience was Tronicat la Miez, all the way from Germany, with her beasty performance, metamorphosing along the way into a tentacle beast. Her fantastic costume and various changes were absolutely first class, showing imagination, and great story telling. An absolute delight to watch...!

Just as you got over one resplendent act, appears La Viola Vixen, Australian performer, wowing the crowd with her parody of Cruela D'Vil in her black and white wardrobe, producing fluffy small puppies from every place on her body. A cruelly glamourous performance, with dark humour, captivated the spectators with grace, wit and satire.

From glamour, to mysterious gothic, Xarah von den Vielenregen, from Germany, eerily captivated the audience with a spectacular headdress, and grand costume, teasing and stripping to a dark finish...!

A troupe of performers, from the four corners of the globe, delighted the audience, who gave a grand ovation...!

Although the venue didn't reflect the glamour of burlesque and cabaret in its grandeur, the cultural history of the Bellevilloise attracted an audience who was receptive to this new type of entertainment. A very different affair from other burlesque festivals, as this had various focuses: a night club in the cellar, a village that held a party with a theme and a burlesque show for the entertainment of the crowd.

A burlesque festival with a difference, giving back to the more popular culture what Paris gave to its people back in the 17th and 18th century: a mockery and parody of life with all its intricate sides. After all, burlesque was a cultural drama performed to produce laughter by caricaturing a serious topic. Something that many performers tonight successfully delivered with glamour, wit and beauty.

Hopefully, Paris will continue to bring the cabaret that is 'Burlesque' to a wider audience, taking a rightful place in the European festivals events. 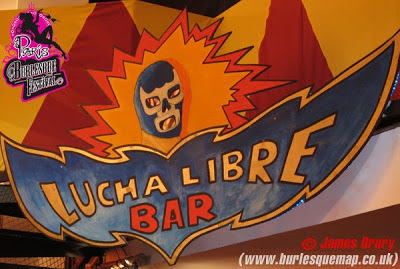 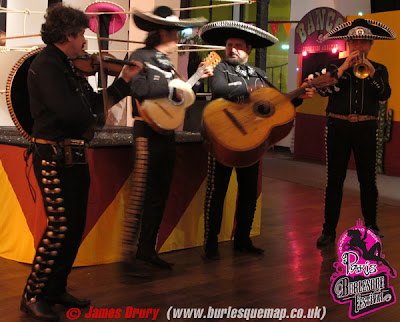 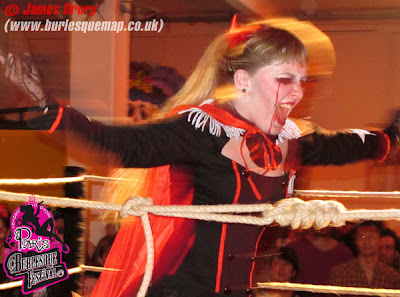 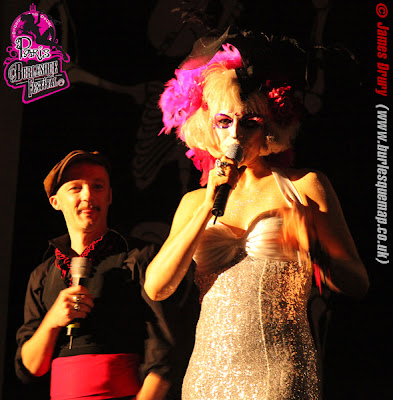 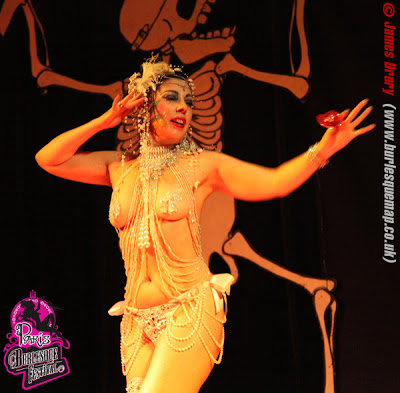 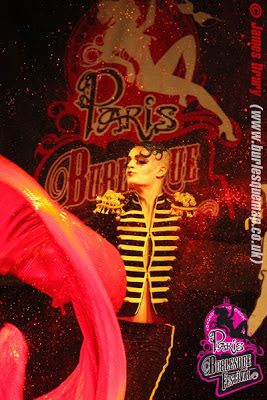 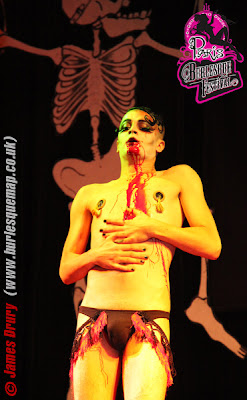 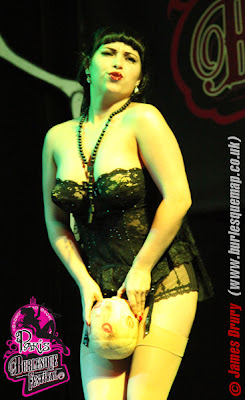 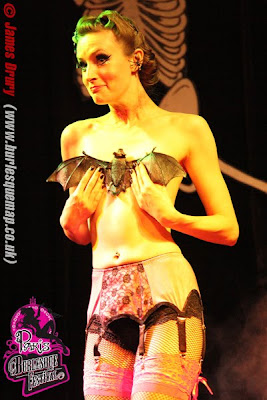 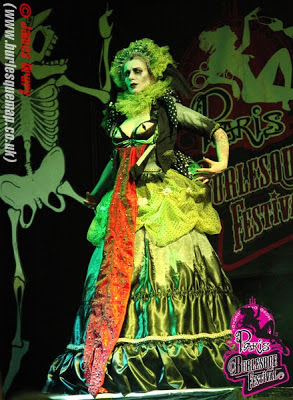 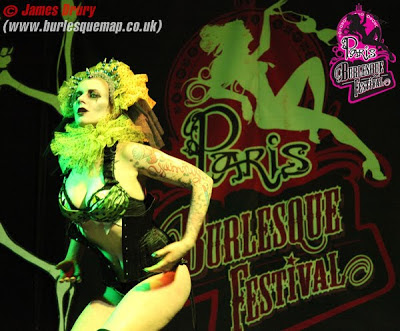 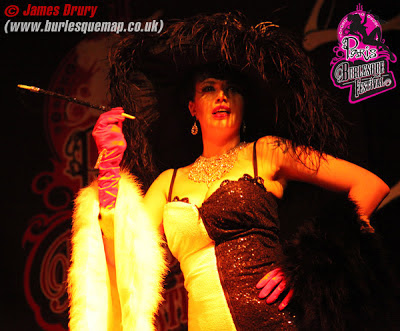 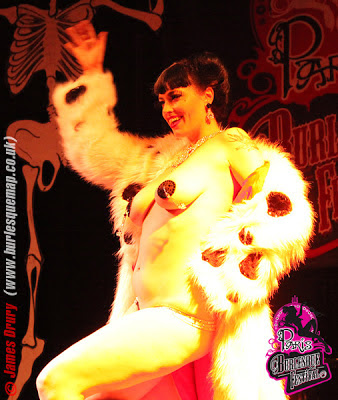 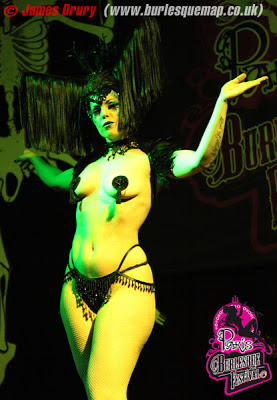 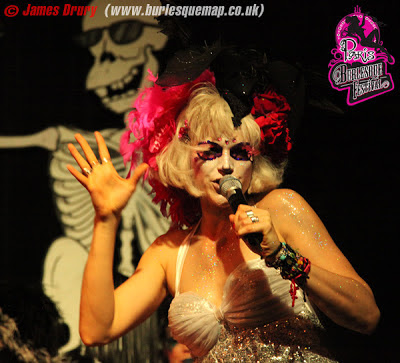