AMY WINEHOUSE hijacks a Burlesque Show in central London, to the crowd’s great surprise.
Last night an audience was thrown into complete shock, as a burlesque cabaret show was hijacked by the famous singer, Amy Winehouse.
The grand opening of the City Burlesque Club, in Farringdon Road, central London, showcased many celebrated burlesque performers along with a jazz band led by Mitch Winehouse.
The audience, who had been enjoying the music, was bewildered when the stage was taken over by the musician’s eminent daughter, Amy.
The singer had attended the cabaret to support and watch her father perform from his own repertoire. However, it seems that she had been planning her surprise, as she changed into her leopard-print dress before jumping on stage. Renowned for her impromptu behaviour, the spectators watched her take the spotlight next to her father and grab the microphone. Miss Winehouse performed three of her songs before being joined by her dad for a duet.
At ease, as if she had rehearsed the whole show, she sat on one of the musician’s drums whilst singing her latest hits. Before bidding her goodbyes, the singer, thirsty for yet more attention, decided to surprise a man in the audience and sat on his lap, as he smiled nervously.
The City Burlesque Club, formerly known as Venus, is a table and lap-dancing club that opened its doors last night with a new name. The venue had advertised a burlesque cabaret show and attracted a connoisseur crowd who felt disillusioned with the result. The spectators had anticipated a showcase of burlesque performers but instead watched a pop star and a hip pop dance group, which left them all perplexed. The club remains opened as a pole-dancing nightclub.
James who had attended to see the inauguration of the burlesque show on behalf of Burlesque Map London, was ready with his camera and captured the unexpected moment, together with the rest of the show. 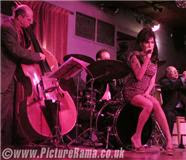 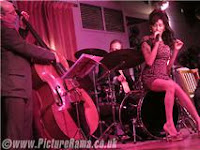