Chaz Royal's all male cast, showcasing UK and international performers, attracted a very rowdy, mischievous audience at the Royal Vauxhall Tavern, a pub in the heart of the gay community in London. 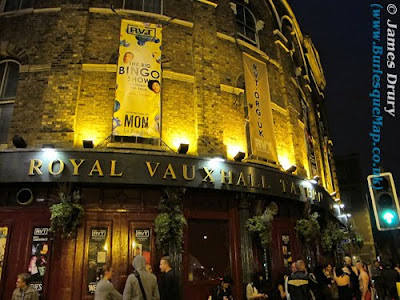 A show full of bawdy humour, satire and parody, Boylesque brings us another angle to the original traits of burlesque, with vaudeville entertainment and the art of striptease in their own individual way.
A much anticipated show in this festival, the ladies were out in force. Judging from this vociferous crowd, full of screams, raucous throughout the whole show, ladies and gentlemen, had a great time. The dress code might not have reflected the glamour of other events, but this crowd was one of the most engaging this week!

Joe Black, our compère for the night, a charismatic eccentric who captivated the audience taking them on a roller coaster of laughter, rudeness and entertainment in his unique style. 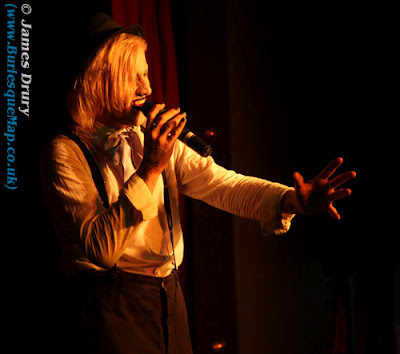 On the menu tonight, Lord Ritz tried to teach us some British etiquette in his top hat and tails; the good boy turns bad stripping to a corset and Union Jack underpants sending the spectators on a whistling frenzy.
But this was just the starter. Duke De Milo, full of class and charm and his tribute to 'Chicago' gives a brilliant performance, dancing and singing all the way to his striptease that leaves the audience in a state of relish. 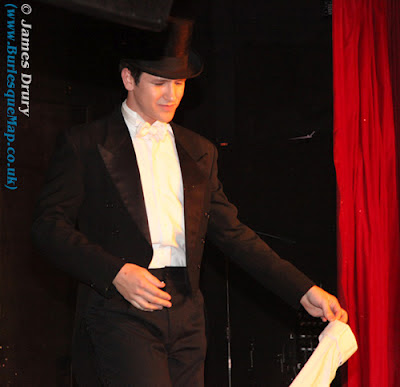 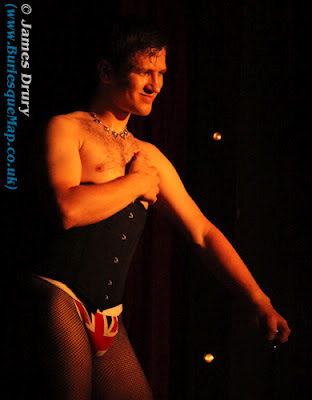 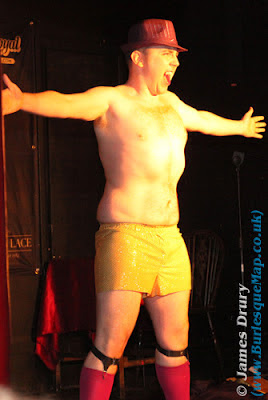 
Expecting the best from the boys tonight, the crowd is delighted at Mr Mistress in his long dress, ostrich feather fans and painted beard, who dances his way from one gender to another with perfect moves.
Undeniably, the most applause so far and Absolutely Fabulous! 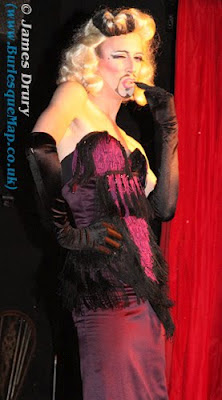 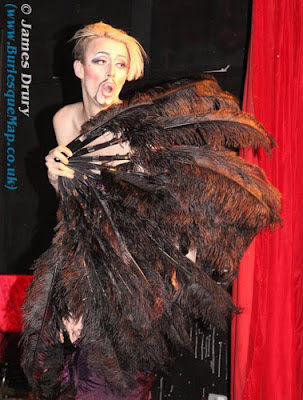 The best of British advances in a safari expedition with Hooray Henry juggling with fire; his fantastic acrobatics raise the heat to a hot raunchy striptease in his 'standing to attention' finale. 
But nothing had prepared us for the final act of this round! British Heart in his white coat, surgical mask, plastic goggles and black gloves had us fooled thinking this might just be a lab act. But what a performance! A white coat for a most bonkers act...!
The mad scientist...!

Changing into a leopard's print outfit, a real animal is born! British Heart shows us everything he can do...! And I mean everything! Leaving nothing to the imagination when the crowd gasps loudly as the only item separating us from his 'sexual organ' is a cock-sock that he snatches off then covers himself with a load of foam... To the crowd's astonishment, he leaps onto the audience who quickly disperses in a panic, fleeing the mad scientist gone truly bonkers...! 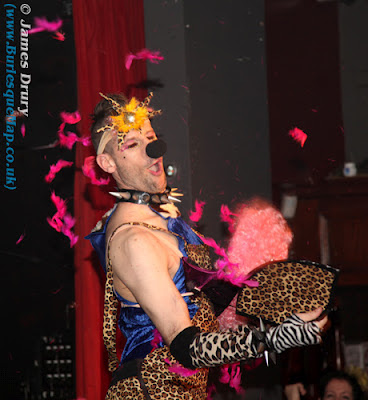 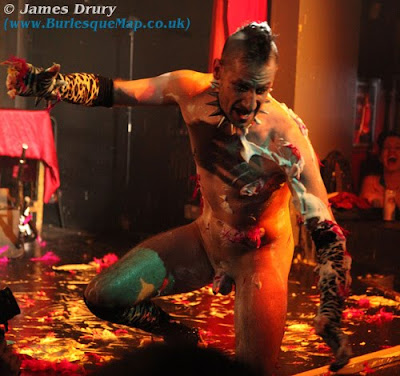 After British came The rest of the World....!

For entertainment loaded with energy, Smokin McQueen and his bunch of bananas provided great moves to 'I want to be like you' from the 'Jungle Book'. A favourite amongst the crowd tonight who gives a great ovation to the strip leading to the 'one banana' epilogue...! 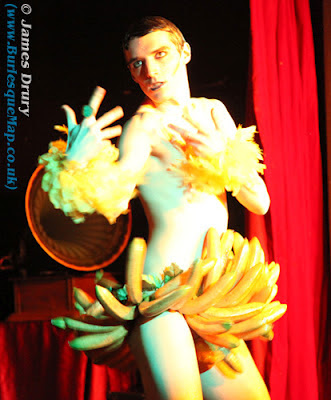 
All the way from the USA gallops in Go-Go Harder with his cow-boy theme; the boy next door meets the whore. A fabulous performance of 'horse riding', line dancing and striptease. An extremely entertaining act according to the frenzy and screaming crowd. A crowd hard to tame after Go-Go Harder wears nothing more than his hat to hide his 'manhood'! To show us he has been branded, an illuminated 'H' on his dick pouch provoked a standing ovation with an 'encore'...! 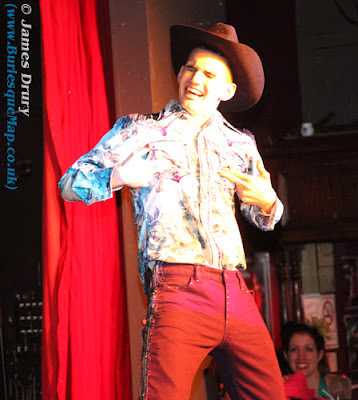 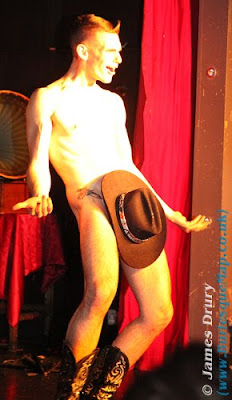 And finally, flying in from Spain, Marcos and his parody of Freddy Mercury's 'I want to break free' is still a favourite, no matter how many times you have seen it. Marcos is an extremely talented acrobat who, despite the small stage and unable to perform his famous aerial act, still wowed the crowd with his agile body and his floor gymnastics...!

But did the judging panel reflect the decision of the audience...?

A big applause for British Heart, winning the British Male Crown and Go-Go Harder who swishes away the International Male Crown, to the delight and screams of the audience...!

Absolutely fantastic night...! One of the most entertaining burlesque I have ever attended and if I were to recommend any show, I would direct you to this one, so watch out for next year and in the meantime, find out where these boys are performing and judge for yourselves...

Tonight it was Boylesque with a capital B - one of the best bawdy, vaudeville Burlesque...! Well done Boys...!

All photos by JAMES DRURY 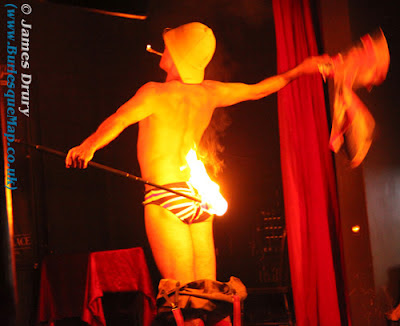 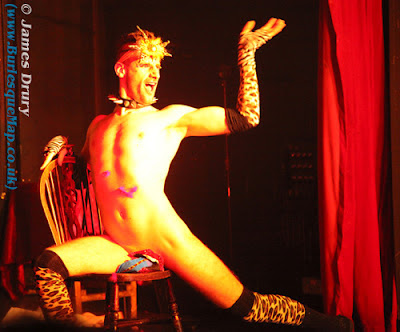 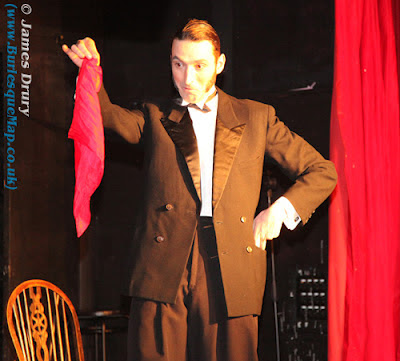 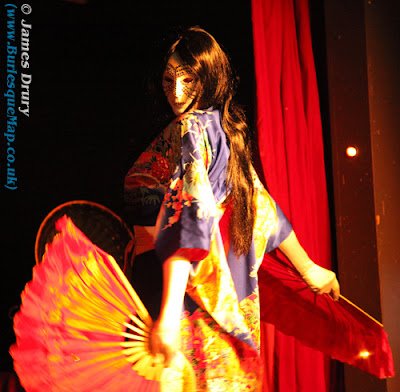 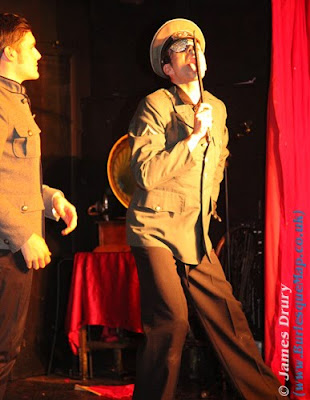 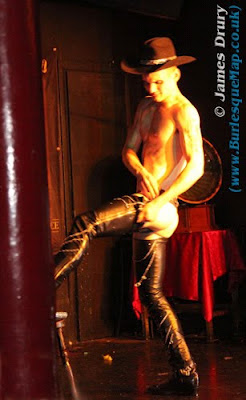 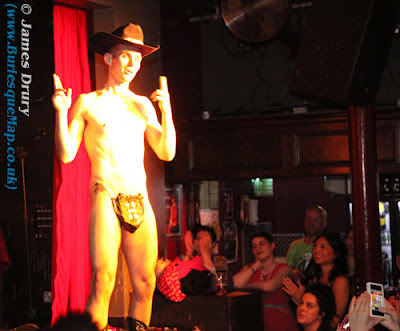 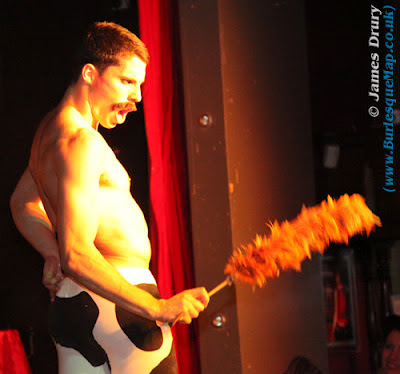