The Burlesque Assassins - Review of the Canadian film by Jonathan Joffe


World War II, Johnny Valentine and Katarina Molotov - lovers and partners in the fight against tyranny and fascism - have devised their best secret weapon, the Burlesque Assassins. Beautiful women who entice key officers in the Nazi regime; they seduce with their charm, ready for the kill. But in the midst of the Cold War, the two lovers embark on different journeys, crossing each other's paths at times, rekindling their affair.

Ten years later, 1956, Johnny is still deep into espionage with a special mission: intercept and take possession of a deadly weapon from the enemy. His latest recruit, Bourbon Sue, a wayward rockabilly, joins his team of seductress spies, Koko La Douce and Bombshell Belle. Their assignment: tempt and kill.

Written and directed by Canadian Jonathan Joffe, The Burlesque Assassins is full of humour, wit, and real burlesque. A story of espionage unlike any others, with charismatic characters who will keep you screaming with laughter from beginning to end.

The Burlesque Assassins is a comedy showcasing beautiful burlesque acts performed by real burlesque performers, performers who can laugh at themselves, remaining professional. Such a wonderful treat, and at last demonstrating on the big screen what true burlesque actors truly do; far from your Hollywood made up stories.

The London première of the film took place at the Bethnal Green Working Men's Club, in December. A venue renowned for hosting many burlesque events throughout the year, including the Double R Club, run by Rose Thorne and Benjamin Louche.
The première was organised by the Sean Mooney, creator of the production company, Beyond the Cabaret, specialising in cabaret, vaudeville and burlesque.

The première was attended by a vast audience, many of the spectators being connected to the burlesque scene. The room was buzzing with laughter, cheers and total delight.

Greeted by a fabulous compère Ophelia Bitz, with the reputation of being naughty and saucy, we had the pleasure to her singing followed by a series of short films, all about cabaret and burlesque, before the main feature film.

One of the main protagonists, Kiki Kaboom, made an appearance after the film, to the delight of the whole room. One of our most celebrated burlesque performers, Kiki has wowed the audience at many events, including the London Burlesque Festival.

The Burlesque Assassins is a must see...!
A true success and an absolute gem. All in all, a real winner...! 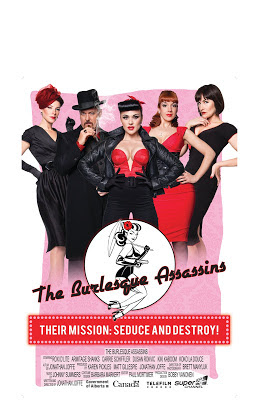